Father Kevin Morris is the Ninth Rector of The Church of The Ascension in Rockville Centre, NY. Before joining Ascension in September of 2012, Father Kevin served as the Director of Pastoral Care at Christ Hospital in Jersey City and as a long-term supply priest at Christ Church in Harrison, NJ. Father Kevin has also served as a Hospice Chaplain in Brevard County, FL, Curate at The Church of the Resurrection, New York, NY and was a Chapel Intern at The Chapel of the Venerable Bede in Coral Gables, FL, his sponsoring parish.

Father Kevin was ordained a deacon at Trinity Cathedral in Miami in April of 2004 and was ordained priest on the Feast of St Andrew, November 30th 2004 at The Church of the Resurrection, New York, NY.

Father Kevin attended seminary at Yale Divinity School, where he graduated in 2004 with a Master of Divinity and a Diploma in Anglican Studies from the Berkeley Divinity School at Yale. His Bachelor of Arts was completed at The University of Miami in 2000 with a double major in English Literature and History and a minor in Foreign Languages.

Father Kevin has been a member of the Society of Catholic Priests, the Confraternity of the Blessed Sacrament and the Guild of All Souls. He is an avid reader, a competent cook and a total anglophile.

In May of 2015, Father Kevin was married to Father Keith Voets, another Episcopal priest that is currently serving as priest-in-charge at the Church of Saint Alban the Martyr in Queens, NY. They also live with Winston, a beloved Cavalier King Charles Spaniel. 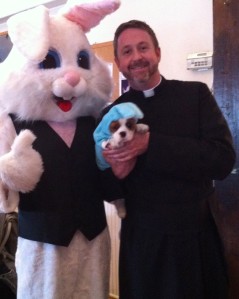