On Thursday, September the 29th, for the Feast of Michaelmas, Bishop Geralyn Wolf will be with us to bless and dedicate our new front entrance, including and especially the new stained glass windows in our doors.

Now if you haven’t had the chance to stop and look closely at these windows, I urge you to do so at some point. Particularly the four archangels who are depicted on the four doors on either side of the two center doors. Now some of these archangels are probably familiar to you. I am sure you have heard of Michael the archangel, patron of police officers and those in law enforcement: soldiers. No doubt you have heard of the Archangel Gabriel, the one who announced to the Virgin Mary that she was with child. And you may have heard of the Archangel Raphael, who is the patron of healing; some hospitals, in fact, are dedicated to or named after Raphael. But I would venture to say that the archangel you know the least about, is the one that is featured on the Northernmost door, which is Uriel.

You may not have even heard of Uriel before, and the reason for that is that the scripture that Uriel comes from is in the part of the Bible that we know as the Apocrypha or the deutero-canonical books, which we don’t read all that often. You actually got a snippet of one of those books this morning in our first reading: the Book of Ecclesiasticus, but there are others and some of them are quite wonderful. This particular book that Uriel is in called Esdras (2nd Esdras to be specific), is fascinating and it is a shame that we don’t read it more often. In the Book of Esdras, there is the prophet Ezra and he is lamenting the state of his people. He is lamenting that the Hebrews have been hauled off into exile and he is beating his head against all of the inhumanity in the world. Ezra is perplexed at how people can be so cruel to one another and why they have to suffer so much. He is questioning God: Why God, why is there so much suffering in the world? Why are my people (your people) suffering? Why are you forcing them into exile?

As Ezra is questioning God, suddenly there appears to him this angel Uriel. And Uriel says to Ezra: I’ll answer your questions, but first you have to tell me three things: how much does fire weigh? how do you measure the wind? how do you bring back a day that has passed?

And Ezra stands back and is perplexed and says: who on earth, what human on earth could answer those questions? There is no way I could possibly answer those questions for you! And Uriel says to him: If you cannot understand the things of this world, of which you have experience, how do you possibly think that you could understand the things of God?

I love that story. In part, because I have so often found myself in the place of Ezra, questioning God and wondering why things are happening to certain people and why people are suffering and why the world is the way it is. And here is this story with this angel of God coming to remind Ezra, and the rest of us, that God is so much more mysterious than we can imagine. We as humans are very limited in our understanding of the world. We like to congratulate ourselves and convince ourselves that we are brighter and more clever than we are and that we have actually figured a lot more out than we really have. But if we are honest with ourselves as humans we will recognize that there is so much in the material world that we don’t understand and don’t appreciate. we can’t even look at the bottom of the ocean; it remains completely mysterious to us and we are still finding new animals on this planet, and yet with our limited understanding of the material world we think that we are going to comprehend all of the mysteries of God’s world? I think not.

This story reminds us of our limitations as humans. We are not nearly as bright and as clever as we think we are. God is more powerful and mysterious than our minds could ever conceive. If we can’t even fully understand or appreciate the world around us that we can see and touch, what makes us think that our individual minds can fully understand God?

Now Uriel goes on to explain and reveal quite a lot to Ezra, and he is the patron of divine revelation and inspiration, but more importantly he makes him understand the importance of approaching God with humility.

Humility is the key to having faith. Humility allows us to recognize that we are not as smart, as righteous, as good, as glorified as we might wish that we were.

Faith begins by acknowledging that we are not the ultimate authority in this world, that we do not understand and know everything, that we cannot understand and know everything. That doesn’t mean we don’t have beliefs. We absolutely do. It doesn’t mean that we don’t hold onto things that we believe have been revealed to us, we absolutely do. I am a very traditional person as you all know, because I believe that tradition is there as a help and a guide to us, but I believe that tradition has to be approached with humility. My personal philosophy is that unless I have a good reason to depart from tradition (a very, very good reason) that I will default to whatever the traditional stance is. It is because I don’t trust myself. It isn’t because I am convinced that I am right; it is quite the opposite actually. I am convinced and I know very well that I can be wrong. I don’t trust myself to make all of the right liturgical choices or scriptural choices. I believe that God and our tradition is so much larger than me, or one priest, or one generation of priests. Therefore I am going to look to those things that have lasted generation after generation after generation, because there I find that perhaps God is revealing something to us that is lasting, unchanging and worthwhile. But in doing so I recognize that it is always possible to be wrong. Even in adhering to tradition, I recognize that it is possible for me as a human or us as a collective group to make mistakes. We adhere to tradition out of humility, not out of pride or arrogance.

In this morning’s gospel, our Lord’s admonition to always take the lowest place at the table is actually quite practical advice, but it also points to a deeper spiritual reality: pride and vainglory are not to be dismissed as minor sins; they are in fact symptoms of a deep spiritual sickness. The one who has to assume the highest place at the table on their own is someone who probably doesn’t have a right view of themselves in relation to God, their neighbors and the rest of the world.

That sort of pride and vainglory is not left to humans alone though. We are not the only ones that suffer from it. I would point out to you that while we talk ab 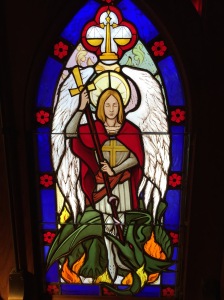 out the four archangels in our windows in the front, that there are actually five angels depicted in
those windows. You probably haven’t thought about that, but there are five angels depicted in those windows. One of those angels, was one who traditional tells us was very proud. He sought to assert himself over God. He thought that he was equal with God, if not better than God. That angel was cast down. If you are looking for that angel he is at the feet of Saint Michael. We know him as the serpent, as Satan or as Lucifer, but the tradition says that what he was was an angel that sought to glorify himself, rather than allow God to glorify him. If we wonder what happens to those who glorify themselves it is spelled out for us very clearly in our first reading this morning:

The beginning of human pride is to forsake the Lord;
the heart has withdrawn from its Maker.
For the beginning of pride is sin,
and the one who clings to it pours out abominations.
Therefore the Lord brings upon them unheard-of calamities,
and destroys them completely.
The Lord overthrows the thrones of rulers,
and enthrones the lowly in their place.
The Lord plucks up the roots of the nations,
and plants the humble in their place.
The Lord lays waste the lands of the nations,
and destroys them to the foundations of the earth.
He removes some of them and destroys them,
and erases the memory of them from the earth.
Pride was not created for human beings,
or violent anger for those born of women.